...and could have creamed calf.

(Note: This chronologically an old post, that I am just finishing up)

I generally avoid heavy alliteration, and the above is why. It can lead down an annoying black hole of sacrificing meaning and content for form and style. In other words, it can suck.

But I had a story to tell about a chain ring, a cracked crank, some pedals and I just got carried away.

For a very long time ( 5 years or so), my crank set has been a Dura-Ace FC-7703 triple. A nice set by any standards. For most of that time, the pedals were Crank Bros. Quattros. I have been riding on the original chain rings all that time too. My best guesstimate is between 15K and 20K miles on those, maybe a little less on the Quattros, for a variety of reasons.

I did not buy the Dura-Ace because of its low weight, although it is very light. I don't race and a few extra grams mean nothing to me. Not really concerned about labels either, but I have to mention it or the story is incomplete. I bought it for durability and craftsmanship. I appreciate craftsmanship. And boobs.

Well, the chain rings wore out and I broke a crank arm.

Not at the same time of course.

No, I was suffering with the worn chain rings, both the middle and the outer , which was causing nasty chain behaviour, especially in the climbs. Now, if you recall, this is a triple set, and apparently the middle ring on this set is used nowhere else on the planet. A chain ring, like brake pads, it not something you buy used, unless you are absolutely sure it has virtually no miles on it. So I had to buy new, I had to buy Dura-Ace and the middle ring in particular is a rare part so not a lot of them sitting around ( remember supply and demand?). Bottom line: It was expensive. I had certainly gotten the miles out of them, and it was necessary, so I bit the bullet and ordered a pair of rings.

However, before the new rings arrived, my massive power eventually did the inevitable-I broke a crankarm: 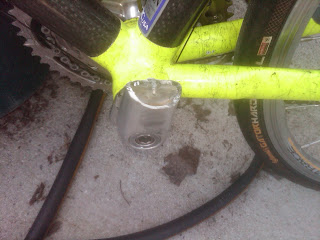 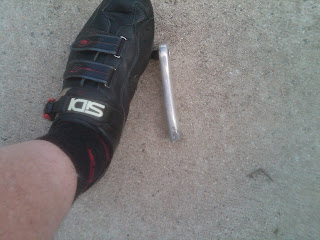 The ferocious physics of force. Minus acceleration, mass is meaningless ( succumbing again to the sweet sirens song of alliteration)

So, I ending up buying a near perfect double, including both chainrings ( in a better ratio than I currently have, for how I ride) for less than I had just paid for the new chainrings for my triple. But I was stuck with both. Its all about the timing.

Tech savvy readers may note that the bottom bracket would also be different. Lets say, for the sake of argument, that I had a normal Q-Factor. Well, it just so happens that I have a perfect double sized bottom bracket jsut laying around. However, I am larger than most mere mortals, moreso in the pelvis area, so a wider bottom bracket on a double may have been just the ticket for addtional comfort and power...

Posted by EvilCyclist at 5:24 AM No comments:

First, this is my favorite quote of the day.
"It's every bit as cool as Micheal Bolton, black socks with sandals, and smoking in a crowded elevator." -David, aka Divot
In this case, they were referring to the Toyota Prius.


Moving right along, I had intended to write today about my early morning coffee run, as a follow up to the last post. It was not to be. As I pedaled away from the coffee shop, with horror I realized I was humming this:

Delta Dawn, whats that flower you have on? Could it be a faded rose from days gone by? And did I hear him say, he was meeting you here today, to take you to his mansion in the sky?


And it strangely fit to the cadence of my pedals.


To be honest, I don't know if it was the Helen Reddy version or the Tanya Tucker version ( or god help me, the Bette Midler version), but the shame and anguish is the same.  It was a Helen Reddy/Tanya Tucker song, from  a guy who used to take his dates in college to see The Ramones and who used to scream along to Suffragette City, even in middle school.

Trying to make me feel better by pointing out that they were both kinda hot is a nice try...BUT THAT WAS IN 1972!!


I won't even post pictures of them, even in their 1972ish glory days, as that would bring me down even more.


Deborah Harry was hot too. Why couldn't I be humming Blondie tunes if I was destined to hum songs by female vocalists? It was  miserable, it was like humming the Devil's own mantra and no matter how much it hurt, I could not get it out of my head.

How did that song get into my head? Was it playing in the background at the coffee shop? Typically they play Jimmy Buffet type music, so possible, but unlikely.

Maybe the caffeine fired up a very dusty,atrophied, cranky, evil neuron from my youth? Delta Dawn was certainly a feature of one or two of the 8-track tapes that got endless reply during our long family vacation drives to the Midwest. It could have been  buried in there for decades, just awaiting its time to rise, like a pop music cicada.

Another odd 8-track tape that got endless play was "The Monkees and the Beatles Greatest Hits", which was  admittedly a strange combination in retrospect. What producer thought that a good match would be one of the most talented  bands of all time, and a made for TV goof troop? However, to be honest,  I would be much more likely to crank "Last Train to Clarksville" than "Yellow Submarine" nowadays. I just like the Monkees better. Go figure. But  any song from that tape would have been at least okay. Certainly less hellish than "Delta Dawn".

But if we are going to pull a song from the early 70's, why not something from David Bowie's Ziggy Stardust? Some of the finest ever. Odd cadence to pedal to though, but maybe if I still had my old Bio-Pace chain rings...

It just keep coming and coming, wave after wave of the same lines. I couldn't remember any other parts of the song, but I could not get rid of the lines  I did know. Like eating bad oysters, they just kept spewing forth, no matter how much you wished it was just over...

In the end, the only cure was a couple of all out sprints that pushed me into ugly  VO2max
red zone territory. I was almost puking and ready to pass out, gasping for air so hard, I couldn't even hum, but it fixed the issue. I like to think I actually killed those brain cells from oxygen starvation so that they never come back to haunt me, but  instead, I can't remember any of second grade now..

-Evil C.
Posted by EvilCyclist at 7:14 AM No comments: