First, I'm not sure how I feel about using alliteration in the title of a bike ride. It seems like a nice, clever idea when I am laying  on the couch in a drowsy, well fed stupor, but when I am sore and cranky on a Monday morning, it just seems pathetic and childish, like Emily Dickenson for pre-schoolers.

But that's not important, it just sets the mood. The mood is cranky.

I take no small amount of pride the the fact that I built my current bike ( and my two previous bikes) up from custom picked components and that I maintain the bike entirely myself. But with that hubris comes a price: I can only blame myself when I fuck up.

I did so this weekend in preparation for the Raven Rock Ramble. My rear chain had begun to skip gears  and hop around recently, culminating in one disastrous event on a steep climb earlier in the week that pitched me over the handlebars.

Sorry, no real video, but for those of you with no imagination, it may have looked something like this, only going uphill, slower and with nobody around :


So, really very little like that, but everybody wants to see a bike wreck.
I should point out this was my first "unplanned dismount" in quite a while.

Anyhow, skipping gears is a pretty good sign of a worn/stretched chain.

I replaced that chain Saturday night before the Sunday morning Raven Rock Ramble.

In that one sentence, I made three stupid mistakes, mistakes for which I knew better. Stop reading and see if you can figure out my mistakes.

Don't scroll down and cheat, you are only hurting yourself. Oh, and you are hurting the innocent kitten that I have attached to the "Automatic Cheat Detector Flash Web Plug-in", ( ACDFWPI) I enabled on your PC. That plug-in, a  patented design of Evil Labs, shocks the snot out of the cute little fuzzball when you cheat, sending agonizing waves of pain through his little body. Pain which he cannot understand and has no responsibility or recourse.
.
.
.
.
.
.
.
.
.
Mistakes:
1. Made a mechanical change right before a big ride;
2. Didn't  test-ride after above unavoidable change;
3. Didn't look closely  if gears on cassette were ALSO worn.

Typically, a chain will wear out faster than the rear cassette. In my case its about 3:1, chain to cassette. I was on about the  third chain, and should have replaced the cassette as well. What happens is the cassette gears tend to wear to match the stretched chain length. So, what I did was make the problem much, much worse; a new chain on a very worn cassettes hops like a frog on acid getting electroshock. ( Don't ask me how I know). I did not notice it until I was staging for the ride Sunday morning and by then it was too late to do anything about it.

This is my worn sprockets ( post ride). Note that the wear is not very obvious: 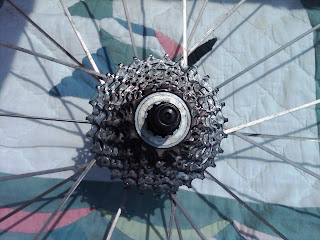 As the riders were staging, I rode around, testing various combination of gears to see if any worked and cursing myself. For whatever reason, including the possibility that it  had no place to go, but maybe due to less wear on that gear, the chain would  stay on 1st gear. Since  I still have the triple chain ring up front, I was essentially left with a three speed bike.

I asked some of the mechanics who set up repairs stations there if they had an extra 9 speed cassette, but they only had 10's, which are more common nowadays.

A lesser man would have quit at this point. I was at fault, and I was already out of bed, so I decided to take my medicine and see what I could do. In the past, I had ridden a single speed mountain bike in a Diabetes road  ride. I did 40 miles on that ride. In hiking boots, by the way, as the pedals are not clipless.  I thought it would be funny and also to assuage doubts about me being a badass: 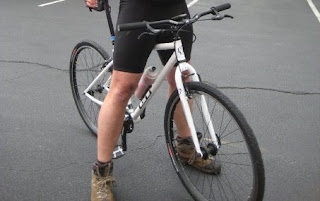 I passed the test. It was funny, and I am a badass. Regarding my ass, you ladies are no doubt wishing you could see it in the above shot. You'll have to be content looking at those sweet  locomotive legs.

So, I took off on the ride. It was not miserable. Although it  felt like I was always in the wrong gear on the rolling North Carolina terrain,  the weather was great, the wind tolerable and I actually rode with some people I knew and had a pleasant chat.

However, I did not finish the whole 100 miles. More like 43. Kinda pathetic by my standards. But I learned some lessons and paid for my stupidity with a little pain. I've got a few more centuries to crank on this summer, so I will make up for it.

Epilogue:
I will be replacing the cassette and bought another chain as a spare: 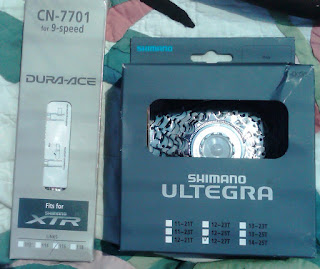 And I just found out they got bin Laden, so that cheers me up.
Posted by EvilCyclist at 10:29 AM