The Ends, The Means, Who Cares.

I almost started writing a political diatribe today. Almost addressed the ends justifying the means. Almost jumped on a pro-military soapbox. Almost dove headfirst into the upcoming election.
But pulled back from the brink. Coitus Interruptus of the ranting train wreck that would follow.
Honestly, I hate to talk about politics. I have many good friends, people I respect, intelligent people, former teachers, ardent fans, all of whom I strongly disagree with when it comes to politics.
I just feel it would be wrong to ruin our relationship and let them know that, since they disagree with me, by definition, they are wrong.
We can talk bikes. Trek, Cannondale, Proteus, aluminum, titanium, Dura-Ace, Campagnolo, Carbon Monocoque Riding Poseurs.( If you leave the politics out) 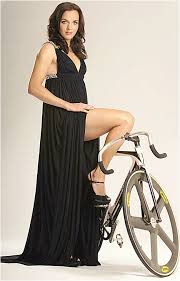 Not in the traditional sense.
I know you, my minions, have come to expect awesome Ayn Rand or Thomas Pynchon prose when you come to my blog. As well you should, and I have constantly delivered.
I'm changing course. Bobbing and weaving if you will, in an effort to stay current.
I am going to begin to put less thought into my posts, and thus hopefully generate most posts. The more astute of you may see this as substituting quantity for quality. The VERY astute will realize that it is unlike that quality could easilybe sacrificed. The truly cynical would point out it may actually be impossible to put less thought into my posts.
Another thing. My independent market studies show that more audio -visual content is a boon for my readers, so I may begin to insert random images into the post. Images that I either have taken myself, or have blatantly pilfered from elsewhere.
Legal notice: Copy-written images will be removed immediately on request. The Evil Cyclist Legal Department is woefully underfunded.
You can also send me pictures you would like anonymously posted. No porn. Although I appreciate it as an art form, there is already enough elsewhere. ( Enough being a relative term, but I'm not 15 years old anymore) 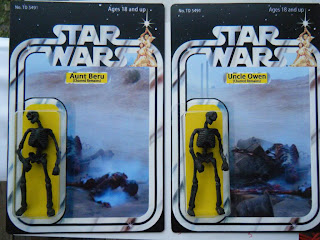 Biking content? I have that too. Its starting to get chilly here in the wee hour of Zero Dark-Thirty when I am now forced to ride. Mid forties this morning. Not bitter cold, but not as nice as the high 60's which have been spoiling me lately.
Let me be clear: I have ridden and will ride when it is much colder. Mid to upper teens is my limit. But I won't like it. I'm stubborn, not insane.
However, this is a bit of a hard time to pick your outfit. Too warm for the real cold weather gear, but cold enough that fingerless gloves leave your fingers aching after a ride. I need to find a nice pair of "mid-weather" gloves. Suggestions appreciated and honestly evaluated. I have great Kombi gloves for the really cold days. 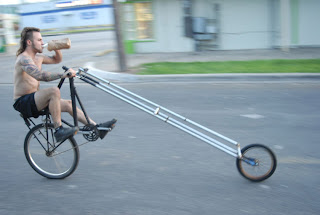 From long past posts, I may have mentioned I have been using the NiteRider MiNewt lights. On the whole, I really like these lights. Well made and bright, with my only complaint till now being that the cable to battery pack connection is sub-par. Well, recently, they have begun to just quit after about 45 minutes. No warning ( they used to give a warning flicker long before dying). I suspect, but have not confirmed, that the battery pack is dying. As you may know, any rechargeable battery has a finite times it can be recharged, and the curve begins drop, battery life drops. I will experiment more and let you know. Until now, it has only left me without front lights for the last mile or two of the ride, so annoying, but not life threatening.
I may also switch to exotic dark matter for power, because I can do that.
-Evil Cyclist
Posted by EvilCyclist at 7:24 AM No comments:

Napalm in the Morning.

There is something you should know. I'm a slacker. Like my father before me and his before him. (Actually my father was a workaholic. However, apparently, the mailman was a slacker.)
Deal with it.
When I have something to say, I'll get around to saying it. When I have nothing to say, I may make something up.
It's been dull lately. I can't commute to the new Evil Labs on my bike anymore, as I spend most of my day at client offices, not in the main office, which is woefully lacking in showers anyhow.
Although I think I smell like roses after a long ride, I am told, by reliable sources ( Mrs. Evil), that I smell like Napalm in the Morning, but from the point of view of the Viet Cong.

This means there is now way to shower or change clothes before work, except at home.
The upshot is that I can't commute on my bike, meaning I need to find other time to ride.
I have to get up at 5:30AM to get some time in the saddle. Now read the first line of this post again. I'll give you a few minutes to make the connection.
>
>
>
>
>
I'm a slacker = I frikin' hate getting up early in the morning.
I hate it even more when that means I am riding in pitch dark.
Gets to the point of loathing it now that it is starting to get cold.
Cold+Dark+Early=Angry Evil Cyclist.
To quote Dr. Evil ( no relation ) "When I get angry, Mr. Bigglesworth gets upset. And when Mr. Bigglesworth gets upset, people die"
I don't have a better solution. I can't ride at lunch and I don't have time to ride after work, and I am NOT NOT NOT getting one of those trainers.
I could move closer to the equator. That would help with the dark and cold issue, but would make the commute difficult. Anyhow, rest assured I am putting my giant brain to work on it.
-Evil
Posted by EvilCyclist at 11:06 AM No comments: