...which is expected and encouraged if you actually are a girl. Not an insult at all.

And, if you want to be a drag queen riding your bike, go out and do it. I've seen some very clever adaptations of platform heels to clipless pedals, and the riders looked fabulous. But they weren't afraid to go all the way, and did it in what would be considered a tasteful drag queen way ( odd oxymoron, but you get my point).

However, if you are guy wearing a sleeveless jersey, especially with a little belly or back peeking out at the bottom like it is half shirt, regardless of you washboard abs, you look like a girl. This girl looks hot: 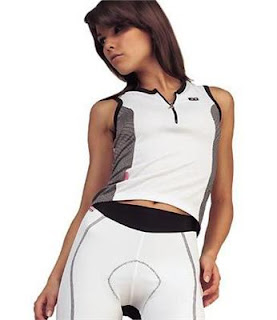 Note that I did not say you look gay. I've cycled with a fair number of gay guys. They generally know better than to dress like that. They may hint at being gay with their outfits in ways I could not hint at my heterosexuality, but generally that's because they are much better looking than me. That is one stereotype that seems to hold true: Virtually all gay guys are better looking than me.

That is no small accomplishment. I've been told ( mainly by streetwalkers in Bangkok, whose honesty is well known and unimpeachable) that I am great looking.

But that's not important, except to me. What is important is that next time you are lying in a bloody pile by the side of the road with my pump mysteriously tangled in your spokes, know that it wasn't just another random act of petulance on my part, but actually a bit of a karmic drive-by because you looked like a dorky nightmare in your sleeveless, too short jersey. And I want my pump back.