Shiva: The Destroyer of Pedals

Went on a 72 mile ride on Sunday through the rolling NC countryside. Some of it was depressing, as only run down mill towns can be during an economic downturn. Some of it was nice, as only wealthy retirement golf communities can be. As a side note, I was chased by dogs in three different locations. The fastest dog was some very little terrier type who quite frankly hauled ass and did not give up. No huge threat, and rather amusing.

Big news is that I broke another pedal. If you have been following, you know I switched back to Crank Brother Quattros, after my right Speedplay Light Actions self destructed. The earlier switch to Speedplay was after my original Quattro right pedal shaft snapped.

Because I bought a pair of Quattros while waiting for the original pair to return from warranty replacement, I eventually had two pair of very lightly used Quattros, one set black and the other blue.

I was riding the black set on Sunday when I started to notice a very annoying squeal during each pedal stroke. This was at about mile 30 of a long unsupported ride, so mechanical failure would be a major problem. The sound seemed to come from my left foot, so I popped out my shoe and noticed the outside endpl 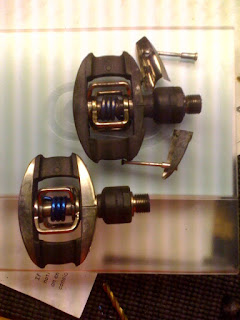 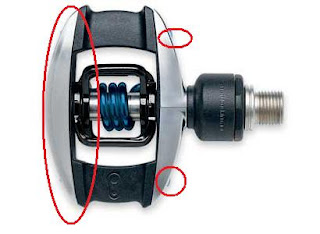 I have no idea when the end cap dropped off. I never heard it fall, and I have not hit anything that would cause damage.

Apparently, that cap serves to hold some type of bearing and its grease in place. Lack of these two items in some form was causing the squealing. However, I had no real choice but to carry on. Other than the very annoying noise, and some wobble and drag, the pedals still worked fine. Because suspense is a major stress creator, and I don't want to kill you by misplaced concern, rest assured that I completed all 72 miles.

So, I have a spare Quattros, which have already been installed ( although the blue looks awful on the new hotness), and I will send the defective item back to Crank Bros to see if they will replace it. I also have the Speedplay pedals coming back soon, so I am not stranded, or really even greatly inconvenienced, but the big question is:

Why are my pedals failing?

My original Shimano 105 ( Look compatible) pedals lasted for thousands of miles before finally wearing out, not really failing. My first set of Crank bros Quattros were probably good for about 10,000 miles. But I have gone through three different pedals in the last roughly 1,500 miles. I'm lighter than I have ever been, I maintain them properly, no wrecks, accidents or abuse, and still they fail. Grrrrr...

I will keep you posted on how Crank bros handles this failure, and when I get the Speedplay's back.