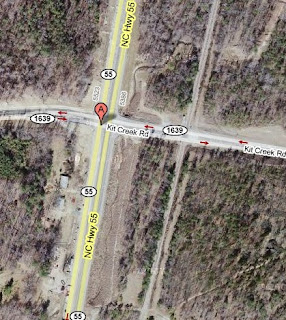 Some places are just cursed: King Tut's Tomb, the Burmuda Triangle, Madonna's crotch. I have a new place to add, which shall forever be known as:
"Evil Cyclist's Valley of Death"
This area has caused more than half of all the flats I have had over the past four years in which I commuted to the Evil Labs.

Flats are a fact of life when commuting. Typically I deal with them by flogging some minions and then just move on with my life. However, much like Agrajag, I eventually noticed a pattern; this spot was out to get me. My last post concerned a flat in this very same area. I didn't commute again until yesterday, due to a schedule deviation ( i.e. Track Out for the Evil-ettes) and got another flat. I had not even replaced the tube in my seat pack, so I was forced to endure patching the ruptured tube.

I have had at least six flats in this area, all of them involving small bits of wire, thinner than your average staple. The area itself is unremarkable, and although there is some new construction catty corner from where I ride, that has not been there for all the flats. Indeed, the only obvious item of interest is that this area lies in a bit of a valley, so perhaps the rain washes debris to the spot more than others. But why here, one very small part of my entire commute?

Really, I have to believe that this is more than just random chance, not a statistical anomaly, but instead, a delicious, malicious plan. Somebody is trying to "out evil" me.

Who is the plotter? Some clever twit eager to get my off my bike and prove their worth? A spurned ex-lover who stews in her own loss, looking for sweet revenge? An old high school math teach who simply never liked me? I don't know, but I will find out! Then, I will lay out my revenge, for all of you as a warning: Taunt Not the Evil Cyclist!

Posted by EvilCyclist at 2:05 PM