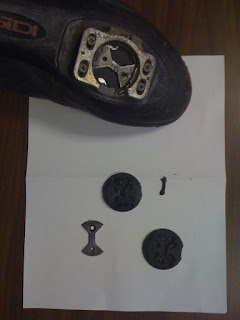 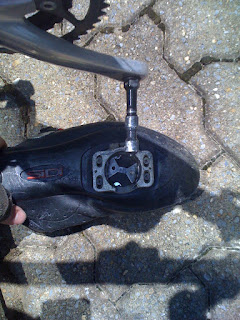 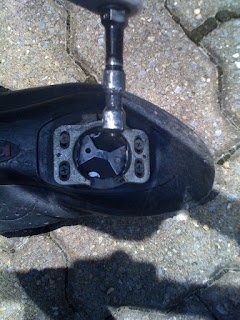 I switched to Speedplay Light Action pedals about 500 miles ago. I had been riding Crank Bros Quattros for thousands of miles before that, and Shimano 105 old school Look compatibles before that. Now you know my my pedal history; don't you feel all warm and fuzzy?

I had snapped the spindle on my right Quattro this spring. I was not angry, as it had many miles on it. Crank Bros. quickly replaced it under warranty, and while waiting, I bought another pair so I was not without a bike. However, it got me thinking about a switch.

Although I had ridden the Quattros for thousands of miles, I was never thrilled with them. I often had trouble clipping in after stopping, especially on critical uphill starts. The cleats seemed to wear out often,and it appeared the Crank Bros were going to discontinue the Quattros.

I did not want to go back to a single sided pedal, despite the latest Shimano pedals getting good reviews. Since my biggest complaint was tough clip-ins, I wanted something better in that area, and a single sided pedal did not seem to provide any advantage.

I have friends who ride the Speedplay pedals and they swear by them, so I decided to give them a chance. Based on a conversation with a sales guy who had never ridden with me and who had no idea how I ride, and clearly didn't care what I bought, I was talked into buying the Speedplay Light Action pedals. This decision was partly determined because the difference between the X series and the Zero series was , well, unclear and partly because the Light Action were in stock and on sale.

First, I am annoyed that none of the seemingly similar Speedplay pedals are compatible. Come on guys...

So, I buy them and install the cleats on my shoes and the pedals on my bike. The right pedal seems okay. Slightly different action for clip in and clip out than I am used to, but that is to be expected. Occasionally a hard clip in, but that may well be the occasionally dirt or gravel bit. However, the left pedal is like its from another planet. It often comes unclipped randomly with no apparent reason. About once every mile, my foot just slides out. I had about five hundred miles on these pedals, I have lubed, cleaned, tweaked, uninstalled, reinstalled, but still, foot just jumps out. Note that there is no real adjustment possible on these. There are shims you can add for foot position, but no way to change the release value. The only guidance the instructions give for this type of issue is to make sure the four mounting bolts for the cleat are not too tight, as they warp the plate. I checked this. Several times.

So, I am planning on going by the shop, where hopefully the same guy who blindly sold me these pedals can give me advice, but before I get a chance: POW! I'm riding a short lunchtime loop and am almost back, maybe a mile away and the right pedal ( the one that has been OK) seems to explode. The whole pedal platform becomes about a half dozen pieces. Note that this was not during a climb or anything, just flat pavement. It appears one screw came out and then the whole thing disintegrated.

I am going to contact Speedplay and see about a replacement. While I do have the original box, not sure about the receipt. I will let all my minions about how that experience goes, but I am not sure, even if they are replaced, whether I will use them again. They were certainly no better in the usability or comfort department than my Crank Bros, and they definitely did not last as long. However, choices are slim. I would consider the X or Zero series, if I could get an honest opinion on the difference between the two, other than that they don't work with each other. You seems to be able to "fix" the float on the Zeros. Big deal. Does anybody ride with no float? I mean anybody who wants to walk in their old age?

In the mean time, I am riding the Crank Bros. Quattros again. I had the replacement that they sent back, which only had a few miles on it.