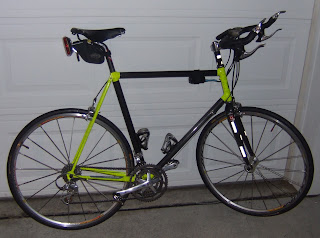 Many of you have been slavishly waiting for pictures of my new ride, slobbering, drooling over the prospect, hoping that just seeing my incredible mount will somehow bring you closer to me. The wait is over. I have enough miles on it to unveil it. Like many primitive tribes who wait 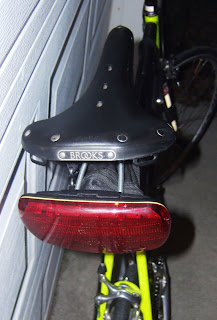 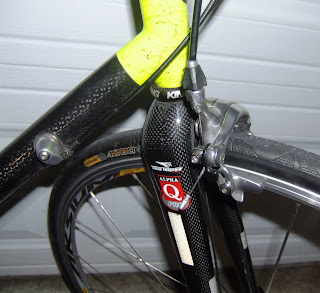 to name children until they are sure they will survive, I waited to unveil this bike until I knew it was right.

A little background: As you may recall, I had been riding an all aluminum Cannondale frame for somewhere in the neighborhood of the last 15 to 20 thousand miles. That frame finally cracked. No hard feelings, lesser beings have cracked earlier under the weight of my evilness. 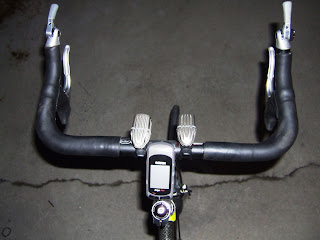 That long term ride had no components from the factory left on it. All components had been replaced over the years. Let me make an important point about replacement items for me. Everything on there was on there because it earned the right to be there. Almost everything on that bike went through several iterations before I arrived at the component that worked best for me. I don't really care what it cost ( compared to a car, anything you put on a bike is still cheap, as long as you are not a fad follower ), weight was never a

huge factor, I don't give a rat's ass if Bicycle Magazine or my local bike shop recommended it ( in fact, that was usually a negative, as I was then sure those recommendations had been bought and paid for) and generally only took the advice of my fellow riders with a grain of salt. Really the only "pro" whose opinion I really listened to was the late Sheldon Brown.

Why? Because a bike, more so than almost every other means of transportation, is a highly personal device. I'm not like any other rider. I'm not nearly the same size as the "average" rider. I don't ride like many riders. I'll not a sucker for the latest fad, flash or fashion. I don't race. And...I don't care what other people think. I put the very best components, based on true function, fit and durability on my bike, then I ride the snot out of it.

So the new ride has most of the same old components. Only real change was the front derailleur, as it was a clamp on, and the seat tube sizes were different.

The "new hotness" is really based on an "old school" carbon and aluminum bonded frame, the Trek 2300. I was looking for a steel ,lugged Italian frame, but this one caught my eye, and after more than 500 miles on it, I am delighted with the choice I made. Shocked its not some cutting edge, flashy, "just like Lance's" bike? Then you haven't been paying attention. Go stand in the corner. Naughty, naughty minion.

First, it is not a stiff as the old frame. This surprised me. Not that is was less stiff, but that I could actually tell. I knew it would be less stiff, but I assumed that this would be rather imperceptible, and would only show up if I cared enough to time myself in controlled circumstances to see how efficient the power transfer was. Trust that I would never care enough to do that. However, I can actually see the lateral flex when try to flex the bike or when I stand up to pedal. But, I just don't care. Why?

Because it is SO DAMN COMFORTABLE. This bike is an order of magnitude more comfortable than the last bike. Now, granted, the geometry is somewhat different. How different? I don't know, because I don't have the specifications sheet for either, and I don't feel like getting a protractor and a tape measure out and measuring it myself, but it is different. I can not only feel it, but the steering stem needed different spacers, so I have objective proof they are different, even though both are 62cm frames.

Comfort is often difficult to measure on bikes. Partly because it is so subjective, but also because you are often comparing apples to oranges. You ride your old bike into a bike shop and try a new bike. Its a new saddle, new handlebars, new pedals, etc. Soooooo many variables. My change was different. Everything was the same EXCEPT the frame. So, I know any comfort changes were not due to the pedals, the saddle, the amount of padding on the handle bar, etc.

The new hotness rocks. Now it just needs a name.

In writing this piece, I realized that I may need to spend some future "blog-inches" going over my choices for the various components, but I really worry that then the blog starts to sound like an infomercial. ( Like some others). Can't have that.